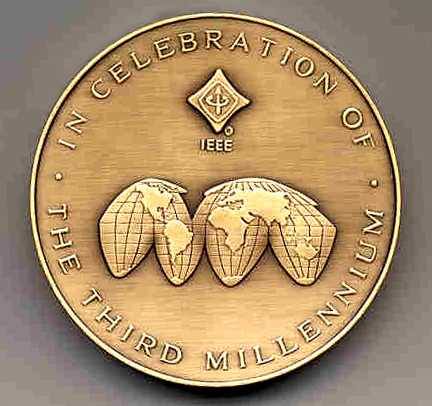 As part of its celebration of the Third Millennium, the IEEE has awarded 3,000 IEEE Millennium Medals and certificates to individuals who have been selected by IEEE societies, regions, sections and major boards for outstanding contributions in their respective areas of activity. The number of awards allotted to each entity was based on size, allowing each society, region, section and major board to award a proportionate number. Not since the 1984 IEEE Centennial Medal has the IEEE given an Institute-wide award to honor such a select and special group of members. Now the IEEE will mark the end of one millennium and the beginning of another with such an award.

World-renowned sculptor, Gladys Gunzer, created the medals. Her work includes the 1984 IEEE Centennial Medal and the 1980 Winter Olympics Medallions. The design will include a world map symbolizing the global nature of the IEEE and the words "In Celebration of the Third Millennium". Each award is customized with the recipient's name.

The Electron Devices Society was allotted 45 medals to be awarded to its members for outstanding contributions to the society and to the field of electron devices.

The following EDS members were named winners of the Third Millennium Medal.

The medals and certificates were presented to the awardees at a special EDS Luncheon on 10 December at the San Francisco Hilton and Towers Hotel, San Francisco, CA USA in conjunction with the EDS BoG meeting and the International Electron Devices Meeting (IEDM).