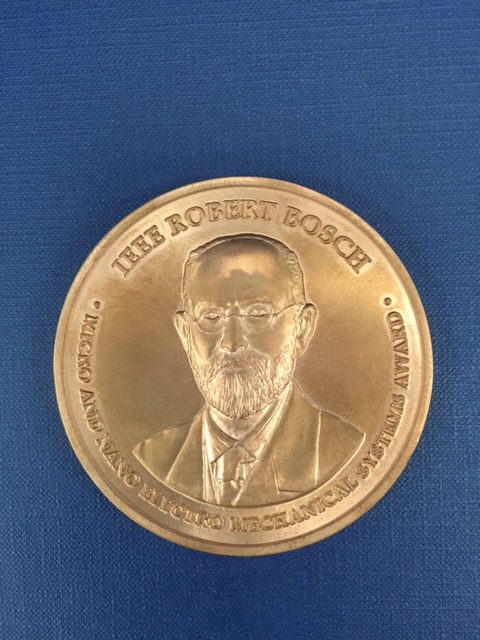 The Robert Bosch Micro and Nano Electro Mechanical Systems Award was established by the IEEE Electron Devices Society in 2014 to recognize and honor advances in the invention, design, and/or fabrication of micro- or nano- electromechanical systems and/or devices. Individual contributions should be innovative and useful for practical applications.

This award is sponsored by the IEEE Electron Devices Society with financial support from Robert Bosch LLC. It is intended that the award will be presented annually to an individual or to as many as three individuals whose achievements and contributions are judged to meet the selection criteria for the award. The award will be presented at an IEEE conference of the winner's choice. It is not necessary for the recipient(s) to be a member(s) of IEEE.

Please note:  The EDS Bosch Award cannot be given to a candidate for the same work for which an IEEE Technical Field Award, IEEE Medal, or other society level award was previously received.

Nominations should be made using our online nomination form and submitted before midnight (EST) on October 2nd to the EDS Executive Office. Letters of recommendation must be sent directly to l.riello@ieee.org according to the same schedule.

Although the IEEE Electron Devices Society (EDS) is pleased to invite all individuals and groups in the OFAC embargoed countries to submit nominations for IEEE EDS Awards, the IEEE EDS cannot provide any award monies to members from such countries at this time.
Join IEEE | Sign In