It is presented annually to honor an individual(s) who has made either a single or a series of contributions of recognized scientific, economic, or social significance in the broad field of electron devices. Nominees are not required to be IEEE or EDS members.  The recipient(s) is awarded a certificate and check for US$5,000, presented at the International Electron Devices Meeting or any of the EDS flagship conferences​ (EDTM, VLSI or PVSC).

Please note:  The EDS J.J. Ebers Award cannot be given to a candidate for the same work for which an IEEE Technical Field Award, IEEE Medal, or other society level award was previously received.

Please complete and submit your online nomination form by July 1st to the EDS Executive Office.  All endorsement letters should be sent directly to l.riello@ieee.org and received by the deadline date. 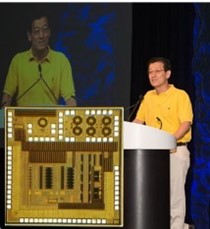 Albert Wang received the BS degree from Tsinghua University, the MS degree from the Chinese Academy of Science and the PhD degree from State University of New York at Buffalo. He is a Professor of Electrical and Computer Engineering at University of California, Riverside, USA. He was a Si Valley IC designer at National Semiconductor before joining Illinois Institute of Technology as an Assistant Professor of Electrical and Computer Engineering. His research covers semiconductor devices, analog/mixed-signal and RF ICs, design-for-reliability for ICs, 3D heterogeneous integration, emerging devices and circuits, and LED visible light communications. He published two books and 300+ peer-reviewed papers, and holds sixteen U.S. patents. His editorial board services include IEEE Transactions on Circuits and Systems I, IEEE Electron Device Letters, IEEE Transactions on Circuits and Systems II, IEEE Transactions on Electron Devices, IEEE Journal of Solid-State Circuits, and IEEE Transactions on Device and Materials Reliability. He has been IEEE Distinguished Lecturer for IEEE Electron Devices Society, IEEE Circuits and Systems Society and IEEE Solid-State Circuits Society. He was President of IEEE Electron Devices Society. He was Chair for the IEEE CAS Analog Signal Processing Technical Committee. His other committee services include the International Technology Roadmap for Semiconductor (ITRS) Committee, IEEE Heterogeneous Integration Roadmap (HIR) Committee, IEEE 5G Initiatives Committee, IEEE Smart Lighting Project Roadmap Committee and IEEE Fellow Committee. He was General Chair of IEEE Electron Devices Technology and Manufacturing (EDTM) Conference and IEEE Radio-Frequency Integrated Circuits (RFIC) Symposium. He served as a Program Director of the National Science Foundation, USA (2019-2021). He was recipient of NSF CAREER Award and IEEE EDS Distinguished Service Award. Wang is a Fellow of National Academy of Inventors, an IEEE Fellow and an AAAS Fellow.

2019 - H.-S. Philip Wong "For pioneering contributions to the scaling of silicon devices and technology"

View All Past Winners

Although the IEEE Electron Devices Society (EDS) is pleased to invite all individuals and groups in the OFAC embargoed countries to submit nominations for IEEE EDS Awards, the IEEE EDS cannot provide any award monies to members from such countries at this time.